Recently, I saw this image making its rounds on facebook: 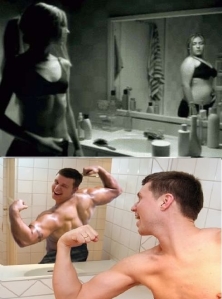 First it made me chuckle, and then it made me sad. The expression on the scrawny guy’s face as he flexes and stares adoringly at himself in the mirror is pretty funny, but the image also reminded me that, for many girls (once including teenaged-me), the body is a source of anxiety and self-loathing, rather than a source of joy or pride. This picture summarizes a glaring truth about our culture: men do not obsess over their appearances like women do, weight gain for them is often more a source of humor than a crisis, and they are not bombarded with advertisements touting exercise programs to “target those trouble spots” or undergarments to “smooth over imperfections.” Obviously I’m making some pretty broad generalizations, but the closest most men come to wearing anything like spanx is the compression shorts they wear under their martial arts uniforms.

Even when it comes to how we clothe ourselves, advertisements for women’s fashion are focused on triggering women’s insecurities, but advertisements for men’s fashion . . . well, there really aren’t many such things. I once saw an advertisement aimed at women which proclaimed how shameful it was to “be seen” wearing the same outfit a second time, and how it was, therefore, necessary to basically cycle through a new wardrobe every season. (The logistics and time this must involve kind of boggle my mind).

Men, on the other hand, elicit no criticism whatsoever if their wardrobe consists of ten shirts and ten pants that are all exactly the same. Men do not pore over articles on “how to dress for their body type,” and Men’s Warehouse once simply promised to its customers that they would like the way they look. Women, it seems, try on clothes and don’t like the way they look.

The fact that our culture pressures women to live up to an unrealistic ideal of female beauty has been so documented and protested that it’s the biggest non-discovery of the season. Males have also revolted against this trend, chivalrously declaring to us that they don’t care if women have cellulite on their thighs or go about with nary a dash of makeup on their faces. (This, by the way, seems to be mostly true- I’ve never heard of a guy asking a girl what her pant size was in order to discern if she’s dateable).

Since men aren’t going about demanding that women have constantly revolving wardrobes or visible abs, why do women feel such pressure? Again, it’s well-documented that these unrealistic standards are kept in place by advertising, because insecure, self-doubting women make really, really good consumers of fashion and beauty products or of the latest expensive fad diet.

I’ve been pondering how to break this discourse of female insecurity and inferiority. You can always start by saying to women to not hate their bodies, to not judge themselves based on appearance, but these are only negative injunctions. Women won’t change how they think about themselves until we put something positive in its place.

Men, furthermore, typically make their exercise goals an achievement of some kind, like lifting a certain amount of weight, running a 10k in a certain amount of time, or catching their opponent in jiu jitsu and making them tap. This, by the way, is why I typically see guys in a yoga class trying to perilously launch themselves into a wobbly headstand against the wall before they’re ready for one. They want so badly to reach that next goal or accomplishment. Once they reach that goal, they can then move on to even greater endeavors, and exercise becomes a constantly entertaining activity because it always offers new challenges.

Women, on the other hand, often see getting down to their target weight as the goal of exercising. This is essentially an uninspiring, negative goal, because once they’ve reached that weight there’s nothing to do except to stay vigilant and keep working to stave off the pounds, and no one wants to live their life merely struggling to maintain stasis.

Carol Horton, who writes sociological commentary on yoga culture in America, called this behavior “vigilant monitoring of the body’s outward appearance.” She explains that “Women who self-objectify. . . constantly ask themselves, ‘how do I look?’ They don’t, however, tend to ask themselves more important questions like ‘how do I feel?’ and ‘what can I do?'” (Carol Horton, Yoga Ph.D., 2012, p. 132).

Don’t get me wrong, I strongly advocate exercising and staying healthy, or striving to become healthy if you’re not. I also think many Americans don’t give enough time and thought to their physical health, but this is probably because the prospect of exercising is presented to them in such an unappealing way, as a form of body-penance that’s akin to filing your taxes every year. I always feel bad for the rows of people I see slogging away on treadmills at the gym, who all look like the experience is just slightly less enjoyable than folding laundry.

Don’t exercise to “get in shape” or to “stay in shape.” Instead, find a form of movement that you truly love, whether it’s martial arts, yoga, rock climbing, swimming, or anything else, and strive to become proficient in that form of movement. Don’t train so intensely that you burn out and come to hate it, but build a habit of consistent training over a long period of time. You’ll find that you come to appreciate your body for what it can do, not how it looks, and being in shape (not to mention self-esteem) will meekly find its way to you without you even seeking it.

2 thoughts on “Ladies, Let’s Be More Like Men (In How We View Our Bodies)”